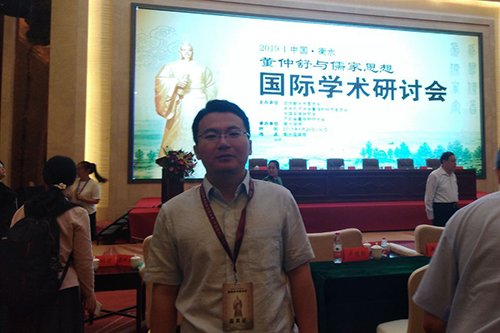 “2019 Hengshui, China Dong Zhongshu and Confucianism International Academic Seminar” was held in Hengshui from June 29 to 30. The conference is co-sponsored by Hengshui Committee of the Chinese People's Political Consultative Conference, Dong Zhongshu Research Committee of The Chinese Confucius Institute, China Practical Studies Society and Dong Zhongshu Research Society of Hebei Province, and hosted by Hengshui College. The theme of the seminar is "Dong Zhongshu's Confucian Values and Modern Significance". Overseas experts and scholars from Japan, South Korea and Malaysia, as well as more than 110 experts and scholars from the Chinese mainland, Taiwan and Macao attended the conference.

Mr. Dong of our college was invited to attend the meeting and submitted his academic paper entitled "Dong Zi's New Development of the Pre-Qin Confucian Benevolence Spirit ", and participated in the speech and discussion at the sub-meeting. This paper points out that although Dong Zi's theory can be used for reference by all the pre-Qin scholars, it is essentially the inheritance and development of the thought of Confucian benevolence. To be exact, Dong zi's theory opened up the dimension of pre-Qin Confucian Benevolence External Kings - political philosophy. Dong Zi put forward his theory based on the relation between heaven and man, understood the natural laws by benevolence, constructed the political theology of benevolence by The Theory of Yin and Yang and Five Elements, interpreted the historical philosophy of Benevolence by the spirit of Chinese people, normalized the realistic politics by the theory of heaven and man, and sought for the legal basis and governance ideas of politics.